According to the U.S Bureau of Labor Statistics, total employment in Montgomery County grew by 3% between 2001 and 2016. That ranks 20th out of 24 Washington area jurisdictions measured by BLS. 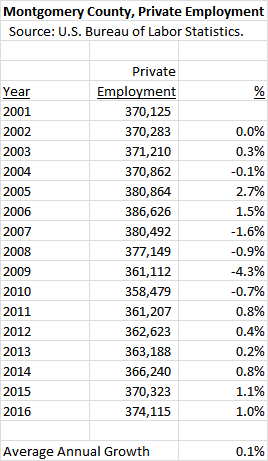 The county’s employment base is not growing fast enough to support the county’s budget or provide its residents with abundant job options inside the county. Instead, the jobs are going to the District of Columbia and Northern Virginia. This trend must be reversed or the county’s economic stagnation will damage its quality of life.